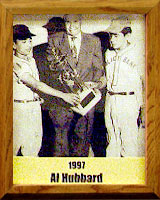 A native-born Tucsonan, Al Hubbard was manager of the top-notch Valley National Bank Little League Team. Little League baseball had been going in Tucson for three seasons, and in those years, Al’s team had never been anything but champions. In two city tournaments, the Bankers waltzed off with city titles. In three league races, in the American League, the Valley Bank Team was crowned champs three times.

Al was a contractor by trade, but he could not have possibly put more into his life-long trade than he did in Little League baseball and his own gang of youngsters. Parents of the players, players and other league managers all respected and admired his wonderful work with the youth of Tucson.