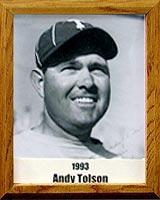 Andy Tolson began his long athletic career in the small mountain town of Globe, Arizona, where he was a member of the 1920-21 high school baseball teams that were runners-up in the state championships. His 1921 basketball team holds the distinction of winning the first state high school championship tournament held at the U of A. It was the heady era of the Roaring ‘20s, and Andy continued to roar with the best of them, earning varsity baseball letters at the U of A as a pitcher (1923-26), losing only two games in four years. During those years he played semi-pro ball at the Grand Canyon and in Bisbee. After graduation, Andy became Civics teacher and baseball coach at Tucson High School. His teams won seven state championships in the 15 years he coached from 1927 to 1941, and they were runners-up three other years. His teams provided him with a .900 winning percentage (90-10). The 1940 state championship team was undefeated and the pitching staff posted a 0.00 earned run average. Andy coached American Legion Junior baseball and was the only JV football coach at Tucson High from 1927 to 1934. During 1938-39 he was president of the City of Tucson Parks & Recreation Department. The Boy Scouts of America was another of his many involvements. He also served as president of the Tucson Kiwanis (active in youth programs). Andy’s 41-year career at Tucson High as teacher, coach, dean of boys, assistant principal and principal were dedicated to the youth of Tucson. In the words of his son Bradley “Dad also was a fantastic ‘second coach’ at home.” In 1973, a new elementary school in Tucson was proudly inscribed with the name Andy Tolson.