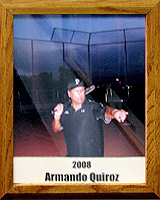 He became head softball coach at Eastern New Mexico University in January, 2005, and coached there three years with a record of 46-37. He left ENMU in August, 2007, to become head softball coach at Pima Community College where he continues to coach. As of March, 2008, Pima had a record of 26-6-1 and was ranked third in the nation. At that date his combined coaching record was 233-91-2.

Armando played two seasons of baseball at Tucson High School, from where he graduated in 1967, and one season at Phoenix College. He has coached Little League baseball and softball and ASA travel teams.