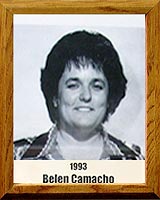 Belen Camacho — now there was a ballplayer. Not only was she a great catcher, but . . . talk about dedication! Late in the season one year Belen became pregnant, but it didn’t keep her from playing the final couple games. She gave birth in the spring and in a matter of weeks rejoined her team. How much time did she miss? A couple practices. Belen, a 1956 graduate of Tucson High, was founder, president and state commissioner of Arizona Youth Softball; was inducted into the Arizona Softball-Baseball Hall of Fame; and was the first woman to be inducted into the Southern Arizona Softball-Baseball Hall of Fame in 1978. (Shortly before she died in April 1993 at the age of 54, Belen was notified by her old pal Bud Grainger that she had been elected into the Pima County Sports Hall of Fame.)

When Camacho was a kid there was no girls’ softball organization in Tucson; but there was a women’s team. Belen was hanging around the ball diamond one day when the adult team happened to be in desperate need of a catcher. She said her career began then and there, and it didn’t matter that she was wearing a good skirt. Belen was 13 years old. She played for 22 years.

Belen coached underprivileged kids, crusaded for better opportunities for all young people, organized benefits for friends in need, ran a league and a state organization and was a half fame mother and wife at the same time.

Friends remember her as a legend, a totally unselfish ballplayer, a great catcher, exceptional hitter, and most of all a lady who loved the game and put her heart into it.