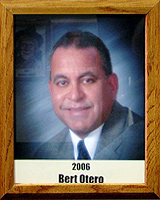 Humberto (Bert) Otero grew up in Tucson and attended Tucson High School from 1967-1971. At THS he played football, basketball and baseball. His football team was state champions in 1970-71. He played baseball at Arizona Western and then transferred to the University of Arizona where he received a degree in Education.

An active member of the Arizona Air National Guard, he has served in Iraq and is currently working the United States borders. He has been active in the Tucson community, earning the Pima County Services Award (1980); the Luz Social Services Teacher of the Year Award (1999); the Operation Allied Ford ANG Chaplain Service Award (1999); and the Sunnyside USD Staff Attendance Award. Bert also has been one of the organizers and leaders for the Tu-Nidito Golf Tournament held each year since 1975 as well as being involved with American Legion, Colt and Pony baseball. In addition, he has been an official for Randolph Little League and for Desert View High School football and basketball.