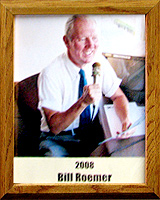 Bill Roemer is a well-known and respected sports announcer and broadcaster known to Tucsonans for more than 30 years. He has served as public address announcer at Tucson Toros and Tucson Sidewinders minor-league games since 1984 and spring training games for the Cleveland Indians, Colorado Rockies, Chicago White Sox and Arizona Diamondbacks since 1978. Bill also has been the announcer at Tucson Greyhound Park since 1987.

A graduate and former athlete at the University of Notre Dame, Bill served two terms as president of the Tucson Press Box Association. He also has coached and officiated in Little League and youth-league basketball.