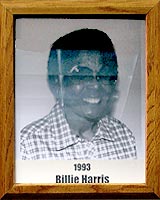 Billie was a professional softball player from Tucson who started her career in 1948 with the Tucson Sunshine Girls, a team that won several state championships. At the state softball tournament in 1950, Billie was seen by the PBSW Ramblers and was asked to try out for the team. She played with the Ramblers until 1965, when the team disbanded, and Billie was chosen an All-American several times. From there, she went on to play with the Yakima Washington Webb Cats. She captured All-Star, MVP, and All-American honors in 1969. Billie returned to Phoenix and played with the Sun City Saints for five years and was an All-Star several times. One season Billie batted .400 and won four of five games as a pitcher. In the Pacific Coast Women’s League from 1953 to 1975, Billie had 264 hits and played 370 games. She scored 123 runs and had 59 RBIs. As a pitcher, Billie had control and speed and also had speed as a runner. She was well known as the “bunt and run.”