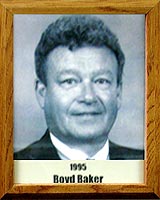 Boyd Baker has been “blowing the whistle” on basketball players for more than 30 years, many of them as an official for the Arizona Community College Athletic Conference. He is also served as head timer for the University of Arizona track and field program and head official for the UA Red/Blue basketball game. For more than two decades Boyd was Commissioner of Officials for high school sports in Southern Arizona. He has officiated in the Rocky Mountain, Big Sky and Pacific Coast conferences and was director of the 1976 NCAA Wrestling Championships. For 21 years he was area commissioner, as well as official, for the Arizona Interscholastic Association where he worked a record 22 state championship games. Boyd headed the Sports Administration program at the UA where he also taught courses in sports officiating and sports law. His credentials also include four years coaching all sports in junior high and a year as a high school basketball coach. During his career Boyd officiated hundreds of competitions, including conference, regional, divisional and state championship tournaments. In 1992 he was named National Federation Regional Official of the Year and in 1994 Arizona Official of the Year. A resident of Tucson, Dr. Baker originally hailed from the cool, cloudy climes of Everett, Wash. He played high school basketball and baseball in Everett and is a graduate of Western Washington State University. He received his Doctorate of Education from the University of Oregon in 1970.