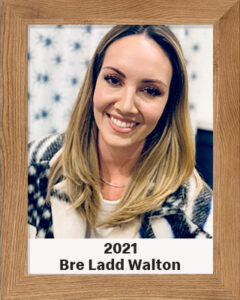 Before Gatorade selects its annual USA high school volleyball Player of the Year, it examines the leading players from 50 states. It’s a complicated process; about 400,000 girls play high school volleyball in America.
In the fall of 2001, the selection committee at Gatorade chose Canyon del Oro High School senior Bre Ladd as No. 1 overall. That put her in the same company with previous Gatorade players of the year such as basketball’s Kobe Bryant, football’s Peyton Manning and baseball’s Alex Rodriguez.
On January 29, 2002, about 200 of Ladd’s CDO classmates assembled at the school’s gymnasium as Ladd was presented the Gatorade player of the year trophy. Her mother, Tammie, and father, Bob, were moved to tears in the emotional service.
It was an unlikely journey.
Before entering CDO as a freshman, Ladd had attended UA basketball, football and softball games with her family, but had never played volleyball — or had much interest in it. She planned to play basketball and soccer at CDO, and maybe try volleyball in the fall semester “just for fun.’’
It turned out to be much more than fun.
“Bre was just a sponge,’’ said CDO state championship coach Melva Lundy. “She learned very quickly. By the end of that freshman year I put her on the varsity. Still she had barely tapped her potential.’’
By Ladd’s senior year, she had been part of the USA Junior National team, spending some of the summer playing with the club in New York. She spent much of three summers playing for Tucson’s touted Club Cactus team, practicing at 6 a.m and then again in the evening.
Stanford, the nation’s No. 1 volleyball program, offered her a scholarship. She was asked to take recruiting visits to NCAA powerhouses Nebraska, Florida, USC and UCLA. After setting CDO records in almost every statistical category, Ladd chose to stay home and play for coach Dave Rubio at Arizona.
It turned out to be a good choice.
Over her four-year Arizona career, Ladd helped the Wildcats reach the Elite Eight in 2002 and again in 2005. The Wildcats went 81-34 and were ranked in the Top 25 every season.
Ladd completed her Wildcat career ranked in many statistical categories. Entering the 2021 season, Ladd still ranked No. 3 all-time in blocks at Arizona, with 400, one of only three Wildcats to hit the 400 category. She ranks No. 5 in sets played, No. 6 in matches played and No. 8 in service aces, per game, over a career.
“It’s funny, after Bre’s first four or five days playing volleyball at CDO her freshman year, she came home and said ‘I really like it.’ ” her mother said in 2002. “If not for the coaching and guidance from Melva, this Gatorade ceremony wouldn’t have taken place.’’
During her CDO days, Ladd was chosen to Volleyball Magazine’s Fab 50 list and was the Arizona player of the year. Rubio watched her progress closely. Most elite volleyball prospect began playing the sport for travel teams when they are 8 or 9. Ladd was 14.
“Bre is almost unique in how fast she can move, how quickly she reacts and how high she jumps,’’ Rubio said during her freshman season, 2002, when she was named to the Pac-10 All-Freshman first team. “You don’t find players as athletic as Bre very often.’’
While a UA student, Bre met Wildcat basketball standout Luke Walton, now coach of the NBA Sacramento Kings. They were married in 2013 and have two children.
— Greg Hansen