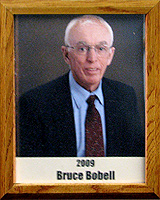 Bruce helped organize and operate the Arizona Major Basketball Association, which played from 1967-69 as the first statewide semi-pro league of its kind. As vice president for the league, he handled all scheduling. He later did much of the same for the Arizona Basketball Congress until 1971.

In addition to his basketball work, Bruce was vice president or president of the Southern Arizona Basketball Association from 1969-76 and coach for several Tucson Youth Football League teams. His baseball teams won several city championships and qualified for the National Baseball Congress Tournament. In 1970, Gil Lamb Construction became the third team in the history of Arizona to appear in the national tournament in Wichita, Kansas.

Bruce played football, basketball and baseball when he was a student at Sunnyside High School (1958-61).