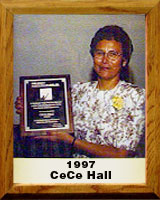 A Tucson native, CeCe attended Salpointe High School her freshman year, participating in volleyball, basketball, and softball. She was named 1961 Outstanding Softball Player of the Year. She transferred to Tucson High the following year, graduating in 1964. At THS, she continued her participation in volleyball, and softball. She graduated from the University of Arizona in 1968. Her coaching career began in 1968 when she guided the ASA Paper Dolls to the Class B City Championship and five 2nd place Class A standings. In 1982 and 1983, CeCe coached a Big League team for Randolph Little League, winning the division championship both years. She was selected in 1982 All Star coach. In 1983 and 1984, she coached the ASA Scoremasters, winning Class A Championship both years and the State Championship in 1984, finishing 2nd in the region. From 1976-1987 CeCe coached the Tucson High varsity, winning the Southern AAA Championship in 1982 and 1983 and Coach of the Year honors as well.