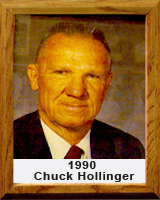 Tucson’s “Mr. Baseball” for more than 60 years, Hollinger was involved with the game on every level. He played for the University of Arizona. In 1940, he was named Coach of the American Legion Post #7 team and he spent summers in that program for 14 years. During that stretch, his teams won 9 state championships, 4 regional titles, and 2 sectional crowns — the latter two put his team into the Legion World Series in 1944 and 1945.

Hollinger became principal of Government Heights Elementary School in 1940 and later that school year was renamed in his honor after he retired in 1975. He also found time to serve as executive secretary of the Arizona-Texas (later Arizona-Mexico) Pro League. He was president for two years. He served, with distinction, with the Tucson Baseball Commission until that group disbanded in 1988.