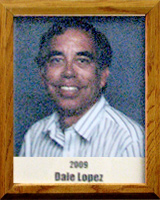 He has officiated high school basketball and softball games, worked as sports director at KTUC radio (1985-89) and overseen the after-school recreation program at Roskruge Elementary and Middle Schools since 1974. He also has been boy’s basketball coach at Roskruge since 1996 (124-39) and has directed Tucson city basketball, softball and cross country events since 1983. His Roskruge basketball team won the TUSD championship for the 2005-06 season, and has won seven division titles in his tenure.