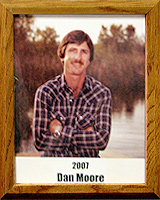 He is and has been a member of the Arizona state Coaches Association, Arizona Baseball Coaches Association and Connie Mack Baseball. Dan played high school baseball and football at Manhattan (Kansas) High School and Sahuaro High School, from which he graduated in 1972. He played free safety in football and the infield, outfield and catcher in baseball. Later he was on the baseball teams at the University of Mexico and New Mexico Highlands University.