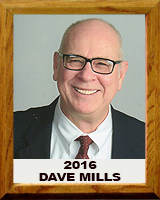 It all started in Tucson for Dave Mills. At Salpointe High School, he participated in basketball, track, and cross country, 1958-62. His senior year at Salpointe, he led the state in scoring, 25.6 ppg, and tied for second in the high jump at the State Track Championships. He was All City and All State, Salpointe Athlete of the year, and was inducted into the Salpointe Sports Hall of Fame.

Mills held a few Arizona High School Basketball records, including 39 points in a State Tournament game. But all his records have since been broken except for 22 blocked shots in one game, which is still an Arizona record and number 5 in the National High School record books.

Upon graduation, Mills chose De Paul University and was a 3 year starter for Coach Ray Meyer. He led his team in field goal percentage, over 50% each year, and is among De Paul’s all time leaders in rebounding, field goal percentage and scoring. As a sophomore, he was one of the leading rebounders in the country with an 11.2 per game average.

Mills was drafted by the Baltimore Bullets, now the Washington Wizards, in 1966, but chose to play in the Italian Professional League instead.

After a successful year, again leading his team in field goal percentage, he entered Law School at De Paul. He is still practicing law in Chicago at age 70. He is still married to his De Paul sweetheart, Maryann. They have three wonderful children and a granddaughter Gia, a champion dancer.