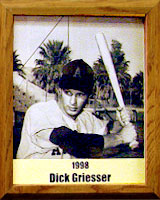 An All American outfielder for the University of Arizona (playing for Frank Sancet), and Olympic baseball star, Dick Griesser has been part of the Tucson sports scene for more than 40 years. As a player, coach, and official and administrator, his fervent efforts to encourage and guide young adults to be upstanding and productive members of society is his legacy.

Dick was also a premier softball player, city and statewide, and became one of the best officials in wrestling and football. As varsity baseball/football coach at Flowing Wells High School, he always reflected the highest standards. He distinguished himself with exemplary coaching skills, and a consistent sense of fair play and good sportsmanship.

Dick was active in the Tucson Football Official’s Association as a longtime member of the football committee and a past president of the association. He coached Little League (1972-75) and Big League baseball (1977-80), and in 1976 was coach/field manager/player for the Tucson Rattlers, a professional softball team (League Champions 1976).