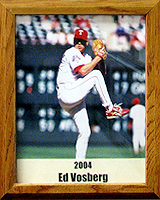 Ed grew up in Tucson where he played Little League baseball. In 1973, his Cactus Little League became the first team from Tucson to make it to the Little League World Series. Even though they came in second place, the team was voted “Sports Team of the Year” in 1973.

He later attended Salpointe High School where he lettered in baseball for three years and football for two years. He was all-state baseball in 1978-1979 and third team All-American in 1979.

Currently Ed is coaching with the Arizona Diamondbacks Rookie League team in the Northwest League. He is a proud member of the Salpointe Hall of Fame and the University of Arizona Hall of Fame. The father of two boys, Vosberg says his induction into the Pima County Sports Hall of Fame will show his children that with hard work and perseverance, your goals can be achieved.