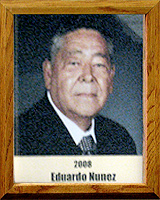 Eduardo Nuñez was the boys’ tennis coach at Pueblo High School from 1965 to 1979 and produced consistently winning teams that regularly reached the divisional and state tournaments. The tennis courts at Pueblo are named in his honor. The players Eduardo coached at Pueblo were not experienced in tennis, but through his patience and skill as a coach he groomed them into competitive and successful tennis players who more than held their own against teams from Sahuaro, Sabino, Catalina and Santa Rita high schools.

Basically self-taught, Eduardo played tennis at Pueblo (1956-60) and was part of the school’s first graduating class. Pueblo did not have a team his freshman year so he convinced a teacher to “coach” he and other players. Eduardo had many matches against Tucson High’s Bill Lenoir, the juniors’ No. 1-ranked 18-and-under player, but lost most of the time in the finals or semifinals of tournaments.

Eduardo received a bachelor’s degree and Master’s of education from the University of Arizona. As assistant principal of activities at Rincon and Pueblo from 1987-2000, Eduardo supervised all athletic activities on both campuses