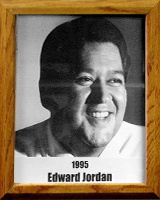 Ed Jordan spent almost 20 years as a Tucson sportswriter, starting in 1958 while a student at Flowing Wells High where he was a three-sport letterman. He has been honored by the National Softball Writers & Broadcasters, Tucson Coaches Association and Arizona Football Hall of Fame for his work in promoting high school sports. Known as the state’s best prep sports authority, he was the first recipient of the Class AAA Conference High School Media Award; and Tucson’s first Shrine All-Star football game was dedicated to him. Along with UA baseball coach Frank Sancet, Ed was one of the first inductees into the Southern Arizona Softball and Baseball Hall of Fame (1978).

Born in Florence, Arizona, Ed was high school sports editor at the Arizona Daily Star from 1957 to 1666, when he moved to the Tucson Citizen.

He died in 1978 after a long battle with multiple sclerosis. The annual MS Ed Jordan Jr. Memorial Award, which recognizes athletes who display the same exceptional courage and determination as did Ed. In the works of P.J. Erickson, Tucson Citizen: “Against MS every call is third down and long yardage. And if it comes to fourth down, there’s no punt; you go for it. But Ed’s attitude never changed. He fought it like he did everything else, with a happy-go-lucky smile and a twinkle in his eye.”