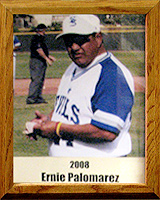 He also has coached in American Legion, Mickey Mantle, Colt League and Pony76 League, as well as ASA Softball simultaneously with baseball. His summer league teams have won many state and regional tournaments.

Ernie also graduated from Sunnyside in 1973 and played basketball as well as baseball. He was second-team All-City his junior year and first-team All-City and honorable mention All-State as a senior in baseball. He also played for the first-ever baseball team at Pima Community College. Ernie went on to Northern Arizona University where he played baseball in 1977 and 1978 and was a graduate assistant coach in 1979. He has served with many committees for baseball as well as civic groups in the Sunnyside community.