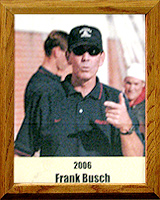 A native of Cincinnati, Frank experienced coaching for the first time at age 16, substituting for a missing coach at his swim club in Edgewood, KY. It was then he learned how influential a coach can be and decided he would become a swimming coach. Busch graduated from Loyola, IL University in 1973. In his 34th year of coaching, Frank started in the U.S. Swimming coaching the Northern Kentucky Piranhas fro 74-78; the Cincinnati Marlins from 79-80; the University of Cincinnati from 1980-1989. In 1989, he moved to Tucson to take a coaching job at the University of Arizona where he has been ever since.

Busch also served as a coach at the World Championships in 1993, 1998 2003, and 2005. He was an assistant coach for the 2004 Olympics, primarily coaching Gold Medalist Amanda Beard. He has earned a reputation for foreign swimmers and many of them have chosen to attend the University of Arizona, including Olympic medalist from England and South Africa. A respected authority in coaching style and technique, Frank has produced a series of videos on swimming skills and techniques and was chosen to be an assistant coach for the 2008 Olympics in Beijing China.