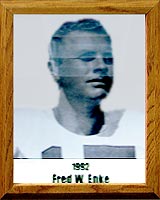 Twenty-two months after graduating from Tucson High School in 1943, (and following an intensive training course in Corpus Christi, Texas) Fred W. Enke pinned on the gold wings of a U.S. Naval Aviator. Back home from the war three year later, he packed away those wings and donned the red and blue colors of the University of Arizona where, every season through 1948, he lettered in football, basketball, and baseball. During those playing days at the U of A, Fred was named to the All Border Conference in football and basketball and led the entire U.S.A. in total offense (1947). He was, and still is, often referred to as the University of Arizona’s “best all around athlete!”

In 1948, Fred again traded uniforms, this time suiting up in a professional jersey with the Detroit Lions. Between seasons with Detroit, Fred returned to the UA where he earned his Masters Degree and handled the coaching duties for the freshman baseball team, while also contributing many volunteer hours working with youngsters in the YMCA. After four years with the Lions, Fred continued his outstanding pro career, playing quarterback and halfback for several seasons with the Philadelphia Eagles and the Baltimore Colts.