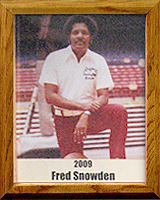 At Arizona, Coach Snowden and his “Kiddie Korps” enjoyed immediate success by having winning records in his first seven seasons and leading the Wildcats to the post-season three times, including the Elite Eight in 1976 and a Western Athletic Conference championship. His coaching record was 167-108 and he helped five UA players reach the NBA.

Coach Snowden was inducted into the Arizona Sports Hall of Fame in 1988. He was named Tucson Man of the Year in 1973 and was named Coach of the Decade by the Arizona Daily Star in 1979. He passed away in 1994 at the age of 57.