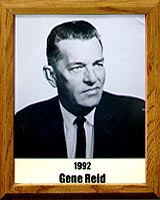 Gene C. Reid, a native of Washington State, came to Pima County at the age of 12. The tall trees and running rivers of “back home” were lost in the shuffle. An alumnus of Tucson High and the University of Arizona, Gene became Director of Parks & Recreation for the City of Tucson in 1947. The Cleveland Indians also came on board that year, while requests for parks and park improvements came from all directions. Sixty-two parks were built from scratch during his 31-year tenure. When Little League presented the challenge of more places to play, Gene responded. Recalling the initial meeting at Randolph Park, he said he “had never seen so many little boys in one place at one time.” The ultimate result over a period of years has been 98 Little League baseball parks. “Places to play” was also the urgent request of many other groups. “We built what we could afford,” said Gene. In time, the facilities included 11 baseball diamonds, 11 swimming pools, 3 lakes, 2 golf courses and numerous tennis courts. Along the way Gene received many honors, including an appointment to the Pima County Fair Commission. Upon his retirement in 1978, Randolph Park was officially renamed Gene Reid Park, a most appropriate honor for the gentleman who helped give Tucson so many “places to play.”