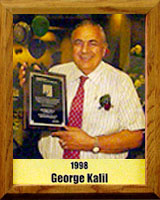 George Kalil, president of Kalil Bottling Co., has contributed to the Pima County sports scene for more than 25 years. Often called the University of Arizona basketball team’s “Number One Fan,” he has missed only two games during the past 25 years, once for a meeting of the Arizona Soft Drink Association and once for Fred Snowden’s funeral. In 1980, he accepted the invitation to serve on the newly formed University of Arizona Wildcat Club Advisory Board.