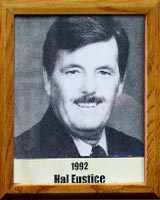 With the ink barely dry on his Masters Degree in Education from the University of Arizona, Howell “Hal” Eustice trotted onto the dust diamond at San Manuel (Arizona) High School to begin his first coaching job in 1960. For the next three decades he would spend his time guiding and encouraging young players on baseball fields at such places as Cochise College (near Douglas, AZ), Hartnell Jr. College (Salinas, CA), and at Sahuaro High School in Tucson, where he coached for 21 years. No stranger to a mitt himself, Hal spent three years playing pro ball in the minor leagues. And was no stranger when it came to helping kids, playing and coaching for many years in American Legion and Big League Baseball. With a career record of 436 wins, Hal coached San Manuel to five District titles and one State Championship (1963). At Sahuaro, his teams took three State titles, two State runner up, 14 League wins and 16 Division Championships.