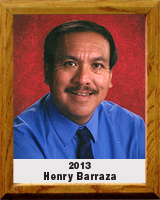 Henry Barraza is a born and raised Tucsonan and graduated from Tucson High School in 1976. Henry graduated from the University of Arizona in 1980 with a degree in Education. While at Tucson High, Henry was a member of the Tucson High Badger golf team for three years in which he earned his first varsity letter as a freshman. In his senior year he joined the track and field team and competed in the pole vault.

It was after high school that he began his coaching career. In 1977 he was asked, by a college classmate, to become an assistant in coaching a girls’ 12 and under softball team. After one year Henry took on his own team, as the head coach, and has not stopped coaching. Along the way, he has coached Bobby Sox softball, Little League baseball, Pony League baseball, AYSO soccer and for the last 32 years coaching boys and girls elementary school students ranging from Kindergarten to 5th grade at C.E. Rose Elementary (2 years), Keen Elementary (20 years) and currently at Sewell Elementary for the last ten years. He has been highly successful coaching cross country, basketball, softball and track and field. His teams won many TUSD titles along the way.

He prides himself as to how he has run his sports programs at the elementary school level. He has always emphasized, to all of his students, these important points after each practice: “School comes first! That’s why you are called student-athletes. The word student comes first.”