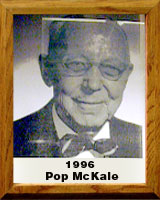 Dr. James F. McKale was born in Lansing, Michigan, in 1887 and graduated from high school in 1905. He earned his B.A. degree in chemistry and history at Albion College in 1910 where he left his mark as a quarterback, a star catcher and broad jumper. Declining an opportunity to play professional baseball, he chose instead to complete his education. As he did, he won All-Michigan Intercollegiate honors.

“Mac” taught history and coached at Tucson High from 1911 to 1914 when, by popular acclaim, he joined the faculty at the University of Arizona. He was appointed Athletic Director in 1915 with a whopping raise to $1,800 a year. He coached every major sport and made Arizona’s athletic program the finest in the Southwest, leading teams in football for 17 years and in baseball for 35 years.

His incredible list of honors includes presidency of the American Association of College Baseball Coaches and election to the Helms College Baseball Hall of Fame. Mac’s “boys” are legion, and it was from these former students and athletes who, stopping by to chat following their return home from World War II, that Mac acquired his other community nickname of “Pop.” Arizona Regent James Dunseath, speaking at the dedication of the UA McKale Memorial Center, said: “Many who knew J.F. Mckale will remember him as “Mac” or “Pop.” To most of us who played for him, he will always be “Coach” or Mr. McKale. Today, as we put his name on the building we are most proud of, we all remember him as “The Grand Old Man of Arizona Sports.”