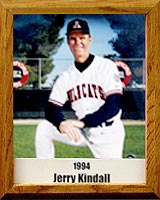 Jerry is the University of Arizona’s all-time leader in coaching victories with a record of 860-580-6 and three NCAA championships (1976, 1980, 1986)) in 24 seasons. The 1976 championship was the first national team title for the UA in any sport. Jerry was named national ABCA Coach of the Year three times and inducted into the College Baseball Hall of Fame in 2007. Under his leadership, the Wildcats won three Pacific-10 Conference South titles, one Western Athletic Conference title, made 12 NCAA postseason appearances and played in the College World Series in Omaha, Neb., five times. He coached 34 players at the UA who received All-America recognition and four who were Pac-10 South Conference Player of the Year. In addition, 44 players earned Pac-10 South first-team honors and 27 were first-team All-WAC. A total of 209 players who played for Jerry at the UA signed professional contracts, 32 of whom played in the major leagues. A native of St. Paul, Minn., Jerry was the first person in NCAA history to win a NCAA baseball championship as a player and a coach. He was shortstop on the 1956 Minnesota national championship team that beat Frank Sancet’s Arizona squad for the title. Jerry was signed by the Chicago Cubs in 1956 and spent eight years in the major leagues. He also played with the Cleveland Indians and Minnesota Twins. Jerry earned a bachelor’s degree in English and a master’s degree in physical education from Minnesota. He stays active in college baseball as a television analyst.