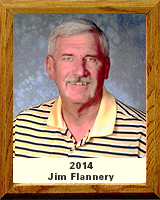 Jim Flannery attended Salpointe Catholic High School from 1962-1966. He lettered in basketball and track. He was selected to the “Order of the Lance” his senior year.

Flannery graduated from the University of Arizona in 1973 with a B.S. in Education. He student-taught at Sahuaro High School in 1972 and was hired there in 1973 where he taught P.E. and coached the freshman basketball team under Coach Dick McConnell.

Flannery started coaching and teaching at Salpointe Catholic High School in 1974. He coached the freshman baseball team 1974-1976. He coached freshman football in 1975 and 1986. He was Junior Varsity basketball coach from 1975-1977 with Coach Gary Heintz.

Flannery coached the Varsity basketball team from 1977-1993. During that time his teams won the Regional Championship in 1984, 1991 and 1992. In 1984 he was chosen Arizona Coaches Association AAA South All Star Coach. His team won both games in Tucson and Mesa. He was chosen Coach of the Year in 1986 and 1991 by the Arizona Daily Star and Tucson Citizen. He retired from coaching basketball in 1993 to watch his son play college basketball.

In 1982 Flannery’s Golf Team received the Team Award from the Tucson Conquistadores. He also received the 5A Southern Region Service Award in 1999. He has been privileged to coach many high school and college coaches and professional athletes during his over 40-year career.

Flannery has been married to his wife Eleanor for 45 years. They have two children and three grandchildren. He has been an important part of the tradition and legacy of Salpointe Catholic High School.