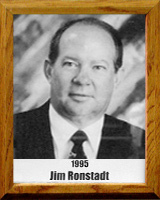 Native Tucsonan Jim Ronstadt has been involved in sports since he was four years old and played baseball in a vacant lot. He was a three-year letterman in football (All-City 1958) and track at Salpointe High School. As Director of Tucson Parks and Recreation Department, his responsibilities included overseeing the management of five golf courses, 24 swimming pools, tennis courts and recreation centers. His advocacy resulted in more youth sports programs, including the award-winning Junior Golf Program which is offered free of charge by the City of Tucson in partnership with the Tucson Conquistadores. The Park and Rec’s nationally acclaimed tennis program, also co-sponsored by the Conquistadores along with the Tucson Parks Foundation and Southern Arizona Tennis Association, is another success story.