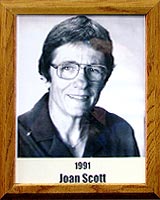 As an athlete at Catalina Junior High School (now Doolen) and Tucson High School (1942-45), Joan participated in a number of sports, including basketball, volleyball, softball, speedball, archery, bowling, golf and handball. She was a member of the Girls’ Athletic Association and the Girls’ Sports Leaders during her two years at Tucson High. While still a student (1946), she won the City of Tucson Women’s Bowling Championship. Joan played shortstop for the “Sunshine Girls,” quarterbacked the neighborhood touch football team and pitched for the hardball team (the only girl on either team). Ironically, Joan’s outstanding scholastic performance resulted in her graduating from high school a year early and she was ineligible for any sports letters. Voted outstanding sportswoman at the University of Arizona in 1951, she was an accomplished golfer, winning state championships in Colorado, Wyoming and Nebraska. Back home in Tucson, she was the Randolph Women’s Golf Association champion in 1955. For five consecutive years (1985-89), Joan was a gold medalist in the Arizona Senior Olympics (50-59 group) and in 1989 took the gold medal in her age division at the U.S. National Senior Olympics. In 1990 she was the Tucson Women’s Amateur Second Flight champion.