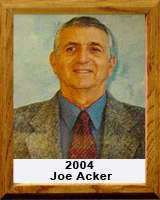 Joe Acker was raised in Pennsylvania. He was named “All-City” and “All-Star” in both baseball and basketball in high school. In Berk’s County, Pennsylvania he holds the record for the “Most points scored in a game–121 points.”

A scholarship brought Joe to Arizona and Eastern Arizona College in 1961. In basketball he was a 1st Team All-Southwestern member.

Joe then entered Arizona State College in Flagstaff (now knows as NAU) where he also played basketball and was named Most Inspirational Player for the 1964-65 season.

In 1966 Joe began his coaching career in Marana, AZ., where he would couach JV-football for 3 years, Baseball for 6 years. He was the Boy’s Varsity Basketball Coach from 1973-2004. During that time he also coached Varsity Girls Softball for 5 years.

In addition to coaching at Marana High School Joe was the founder and director of the Marana Youth Basketball Camp for 33-years. He was also the Director of the Boys/Girls Summer Basketball League. He has also coached at Basketball Camps for the Tucson Gunners, the YMCA, Pepperdine University and the Pete Carril Camps.

Joe has been a member of the Arizona Coaches Association for more than 30 years. Currently (2007) he is coaching Varsity Basketball at North Canyon High School in Phoenix, Arizona,.