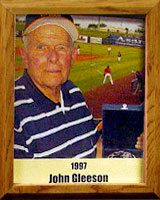 John graduated from Amphitheater High School in 1949 and enlisted and served in the U.S. Navy from 1951-55. After an honorable discharge in 1955 he returned to Tucson. He entered the University of Arizona and did construction (masonry) in the Summers. He got his B.S. degree in 1959. He began his 32 year teaching and coaching career in 1960 at Salpointe Catholic High School in Tucson. He did J.V. baseball and basketball until he became the Varsity Cross-Country coach in 1961 and the Varsity Baseball coach in 1963. John re-built the varsity baseball field and being a brick mason he built the first masonry baseball dugouts in Tucson and probably Arizona. The Salpointe Administration named the Varsity baseball field “Gleeson Field” in 1969. John went to Flowing Wells High School in 1969. He would marry Eva (Lopez) in 1970 and they would have three children and presently have two grand daughters.

He then became president of the PCSHF in November of 2006.

Presentation to John Gleeson in 2016