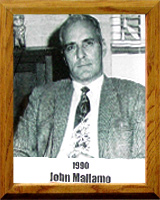 John Mallamo coached Tucson High School to two consecutive state football championships in the 1960s. He compiled a 79-29-4 record at THS after taking over the program in 1956. He became principal of Sabino High School in 1972 when it opened until his retirement in 1980. Mallamo played football at the University of Arizona but his career was interrupted by World War II. During his 11 years at Tucson High his teams were the city’s most successful. “He was the best disciplined coach I’ve ever played for,” said Rich Alday, his quarterback on the 1965 state title team and former Pima College baseball coach. “He was outstanding. He was a perfectionist. He made sure we were prepared for the ball games.”