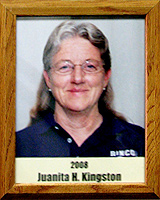 Juanita H. Kingston has 34 years experience coaching volleyball, softball, basketball and track and field at the high school, junior high and club levels. She has been the varsity girls’ volleyball coach at Rincon High School since 1988, earning Coach of the Year honors in 1988, 1991, 1992, 1993 and 2005, as well as boys’ volleyball Coach of the Year in 1998. In 1993, her Rincon team won the state championship with a record of 26-0 and was ranked No. 23 in the nation by Minuzo Sports. Her girls’ teams also have won 11 region championships, while the boys have won two. Her combined coaching record for boys and girls is 646-279 through 2007.

She was named to the TUSD Superintendent’s Honor Roll for outstanding service above and beyond the call of duty in 1992. Juanita also has contributed her time to Special Olympics and Senior Olympics volleyball events.

Juanita played volleyball at Catalina High School and was team captain and the Volleyball Sports Girl of the Year for 1972 and led the team to the state championship. She earned four letters playing on the volleyball team at the University of Arizona and played in the NCAA National Volleyball Tournament in 1976.