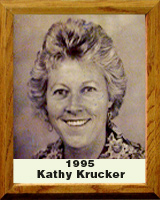 A fifth-generation Arizonan, Kathy kept the ball rolling at the University of Arizona where she played varsity volleyball for four years (state champions, 1970 and 1971). In softball she ruled left field for three years, played basketball for a season, plunged into varsity swimming and qualified for the nationals in the 50 and 100 backstroke and 100 freestyle, and was named UA Outstanding Sportswoman (1970-71). Still in the swim of things, Kathy competed in the U.S. Masters Nationals in 1994, earning medals in all individual events

As coach for 12 years at Palo Verde High, her volleyball teams racked up numerous divisional and city championships along with four state runners-up. Kathy has been named Volleyball Coach of the Year four times and has served as chairwoman of the Southwestern Division and State Volleyball Coaches during which time she led the drive to get three levels of volleyball for girls, night games for the varsity and a 20-game schedule.

A native resident of Tucson, Kathy is the recipient of the 1995-96 Arizona Christa McAuliffe Fellowship Grant and the TANDY Technology Award for Outstanding Science and Computer Teacher. She is a teacher of Marine Biology at Palo Verde. A 1995’s Women’s Sports Foundation Masters Sportswoman of the Year, Kathy was inducted into the University of Arizona Sports Hall of Fame in 1994.