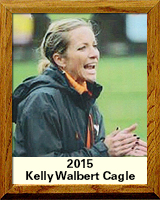 Kelly went on to play soccer at Duke University from 1992-1995, captaining the team and earning ACC Player of the Year in 1995. A three-time All-American, Kelly was named one of Duke’s top 10 athletes of the 1990s, along with Grant Hill and Bobby Hurley. She scored 47 goals, had 23 assists and 118 total points during her 4 years.

Kelly also played professionally in the WUSA with the Atlanta Beat from 2001-2003.

Her illustrious coaching career included stints as an assistant at Wake Forest and the University of Texas. From 2003 to 2010, she was the Head Women’s Soccer Coach at Virginia Tech, turning a struggling program into a perennial NCAA Tournament qualifier and a nationally ranked team. In 2008, Kelly was named NSCAA Mid-Atlantic Coach of the Year.

Currently Kelly resides in Phoenix, Arizona and has opened her own team strengthening business, The 180 Group. Cagle also consults with ASU women’s soccer, PCA, a non-profit, and Phoenix Rush a youth soccer club. She has been married for 15 years, and has two daughters, Maggie (11) and Nancy (7).