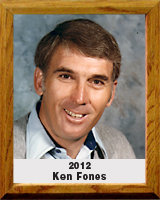 A graduate of Catalina High School (1959) and the University of Arizona, Ken Fones was the head tennis and football coach at Catalina from 1963-69. His tennis teams had a remarkable 99-0 record during this span and won five state championships and six district titles. The dual meet streak ended when on of Fones’ players threw his racquet after what her perceived to be a bad line call. Fones pulled his player off the court and thus forfeited the match.

Fones was football and tennis coach at Santa Rita High School (1971-82) and counselor and assistant softball coach at Sahuaro High School from 1982-1993. While at Santa Rita he was named the Naval Academy Blue and Gold Officers and was able to help many young men and women go to the Air Force, Naval Academy, West Point and Coast Guard Academy or ROTC at 20 universities.