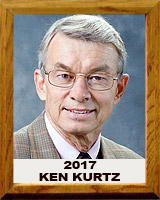 Ken Kurtz came to the University of Arizona as freshman in 1963 from his high school in Aurora, CO. He had a very successful senior season playing baseball and had aspirations of playing professional baseball. He was counseled by a minor league scout of the St Louis Cardinals by the name of Kobe Jones that if he wanted to realize his dream of playing professional baseball it would be best served by going to college first.

In his professional baseball career: he signed with St Louis cardinals after junior season at the U of A in 1966 and played pro baseball for 6 years (all in the minor leagues).

In his coaching career Ken coached varsity tennis, freshman basketball and varsity baseball at Santa Rita HS for 7 years. He also coached for several years in the COO little league district. He also served as board President for COO LL for 2 years.

His career awards include: All conference baseball District 7 Junior season in baseball, voted Intramural Athlete of the Year at U of A 1970, passed skills test to become one of a few men at the U of A to receive honorary athletic achievement award 1971. In the Tucson community he served as board president for 3 years for Northwest YMCA and fund raising to bring the NW YMCA to its present location.