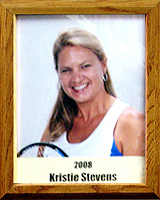 Kristie Geiger Stevens has been girls’ tennis coach at Catalina Foothills High School since 1992. Her teams have won eight consecutive 4A state championships (1999-2007) and 13 regional titles. She has coached six state singles champions and four state doubles champions. Her overall record through 2007 was 210-15. Kristie has been named National High School Tennis Coach of the Year (2005) by the National Association of High School Coaches and Southern Arizona Coach of the Year seven times by the Arizona Daily Star.

In addition to coaching, Kristie has been a tennis instructor at the Tucson JCC, Tucson Racquet Club and Catalina Foothills Community Schools Summer Program. She is a member of the Angel Charity for Children, Women’s Active 20/30 of Southern Arizona.