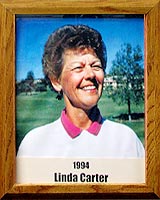 The game of golf has been, shall we say, the driving passion of Linda Carter’s life. This Schenectady, New York native received the Tucson Conquistadores Sports Award in 1982; was Player of the Year (S.W. Section PGA); Women’s Player of the Year in 1986; is a former Head Scorers for the Tucson Open (PGA & LPGA) and has been a member of the University of Arizona Wildcat Club for many years. She has taught Junior Golf clinics in Tucson and the White Mountains; was one of the original organizers of he Walter Hagen Golf Tournament (American Cancer Society), and the Arizona Kidney Foundation Golf and Tennis Tournament.