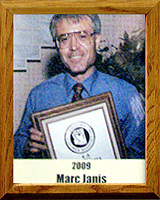 Marc was the girl’s basketball coach at Flowing Wells High School for 16 years (1975-81 1987-97) and organized the first team. During those years, FWHS played in the state tournament 12 times, won eight division and region championships and was 4A state runner-up in 1993. Marc also coached at Blue Ridge High School (2000-07). Combined, his teams won more than 350 games. In 1975, Marc helped begin the Flowing Wells Girls Basketball Tournament with just four teams. It now is one of the largest tournaments in the state.

He also started a summer girls basketball program at FWHS that is still in existence and has served the community for more than 20 years. Marc also coached cross-country, volleyball, track, and softball teams at FWHS and cross-country at Blue Ridge. Marc regularly earned newspaper and coaches’ association awards as coach of the year in cross country and basketball. He has coached in annual all-star games numerous times.