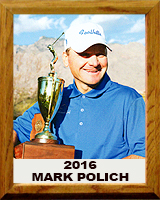 Mark Polich moved his family from Minnesota to Tucson, Arizona, in the summer of 1998. In 1999, he started the high school girls’ golf program at Catalina Foothills. The first year, the program was an intramural program and then began playing at the varsity level in 2000.

Polich had a two-fold motivation for starting this program. First was to give girls a chance to participate in this wonderful, lifelong sport, and the second was hoping that if girls began playing golf, perhaps they would spend more time with their parents on the golf course, precisely at a time when the typical teenage wants little to do with their parents.

The first year was a huge challenge for all involved, but especially for Polich. He quickly discovered this his background as an elite level golfer did not automatically translate into being a great coach. The players, parents, school administrators and Coach Polich all managed somehow to survive that first season. The team even qualified for the state championship and finished in 6th place. But more importantly the players got inspired to learn how to play golf. It was exhilarating for all involved.