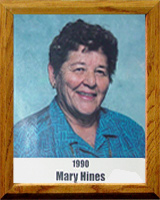 Called the Vince Lombardi of high school volleyball, Mary Hines compiled a 215-27 career record, .888 while coaching the sport for 28 years at Catalina High School. Her teams won six division and 10 league titles. She was named state Coach of the Year three times and in 1985, the National High School Volleyball Coach of the Year. This “sweet bundle of energy,” as one sportswriter called her, had a special magic in her enthusiasm. She so dominated volleyball with her awesome coaching that in only two years over a 16-year stretch did her teams finish out of the money. Over 14 seasons her teams won either city, division, league, or state titles and on four occasions Catalina High was runner-up to the state title. She was named to the University of Arizona Hall of Fame as well as the Arizona Softball Hall of Fame.