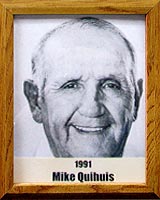 On December 4, 1978, the sports headline in the Arizona Daily Star read: “Quihuis another name for boxing in Tucson.” That was the only one of the many accolades accorded “Battling Mike Nelson,” whose life, for more than five decades, touched on nearly every aspect of the sport. One of Tucson’s top boxers in the 1930s, Mike reigned as Arizona Welterweight Champion from 1932 until 1934. He was a promoter, trainer and manager and served on the state boxing commission under three different governors. He also was semi-pro baseball player and umpire and an avid golfer and bowler who spent more than 30 years promoting sports activities for the City Recreation Department. In addition, Mike was a newspaper reporter and sportscaster for a Tucson Spanish Language radio station for many years. He was widely known and honored as Tucson’s “tireless Good Samaritan” and fighter for the needy. It was the sight (in 1948) of a legless 13-year-old boy dragging himself along the ground on a skate-wheeled cart that prompted Mike to raise money to buy a wheelchair for the youngster. Later he raised funds for artificial legs for the boys and others. In 1982 he received the Jefferson Award for community service and leadership. Once asked about his first “pro” fight, Mike recalled: “It was in 1923. I was 11 years old and this promoter promised us $1 each.” The three-round bout ended in a draw and the promoter ran off with the receipts. “We never got the money,” he laughed. “I’m still waiting for that dollar.” Mike died Nov. 16, 1988, after suffering a heart attack at the age of 76. In the words of former Arizona Daily Star Sports Editor Tom Foust, “Little wonder that Mike’s heart finally gave out. He worked it overtime in more than a half century of giving to others.”