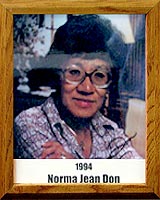 Norma was a pioneer among women athletes and coaches in Tucson at a time when the field was dominated by men and sports participation was considered taboo for women.

Norma is a native Tucsonan who graduated from the University of Arizona with a degree in Education. She taught P.E., health, art, reading and math and coached at Spring Junior High School and Doolen Middle School, leading her teams to several championships. As a student at Tucson High School, she was a member if the “T” Club and lettered in all girls sports. At the UA, she was a member of the “A” Club and lettered in golf, tennis and field hockey.

After graduating, she organized the YMCA “Por Soles” softball team and became the first woman coach in the city league. She is a recipient of the YWCA’s “Women on the Move” Lifetime Achievement Award.

Norma also trained and conditioned national champion Arabian Horses and participated in national equine and animal photography. She also has been “godmother” to UA volleyball, basketball, and softball teams over the years, hosting team parties at her home.