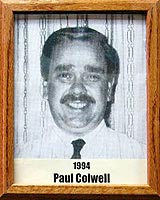 A member of the Professional Bowlers Association and a 1991 inductee into the PBA Hall of Fame, Paul has coached in junior, individual beginners and intermediate advanced programs, as well as professional bowling camps.

Colwell is also a member of the Tucson City and Arizona State Bowling Halls of Fame. Paul has been a television commentator; a University of Arizona Bowling Team coach; and has been active with the Arizona Families for Children and Muscular Dystrophy bowl-a-thons. Professionally, he has twice been a member of the All American Team.