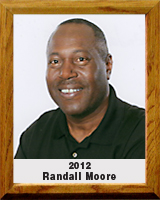 A graduate of Pueblo High School in 1976, Moore was a first-team all-city basketball player as a junior and senior and was named all-city captain and first team all-state as a senior, averaging 26.7 points a game. At Abilene Christian University, Moore earned first-team Lone Star Conference all-star honors and was a third-team NAIA All-American selection.

Moore started his coaching career at the junior high level. In 1988 he became the head basketball coach at Pima Community College. His 1990 team went 24-7, setting a school record for most wins. In 2000 he was named the Arizona Community College Men’s Basketball Coach of the Year.