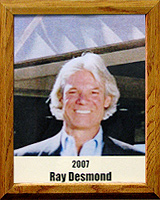 Outside of sports, Ray is involved with many civic organizations. Ray received his master’s degree from the University of Arizona in 1977. He attended the University of Detroit High School and played track and field, and baseball. Ray founded Nova Home Loans in Tucson in 1980 and is a mortgage banker.